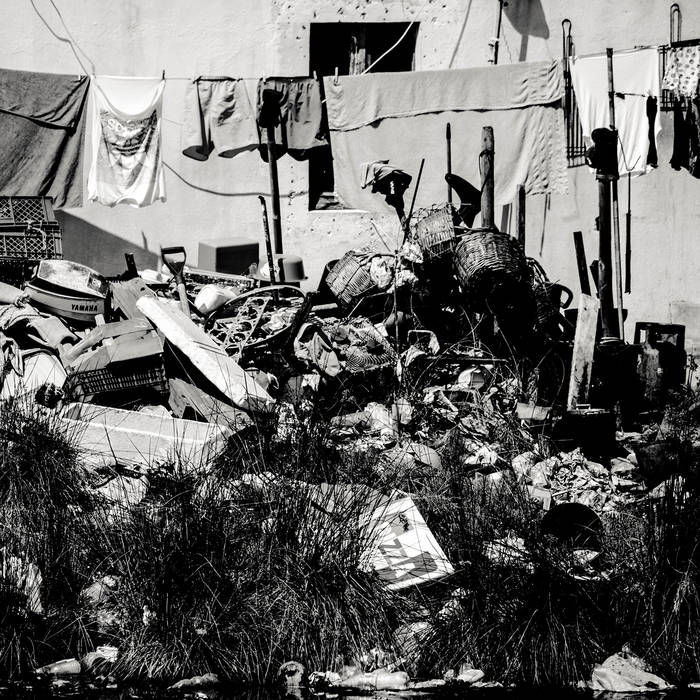 Acoustic-electronic installation and intervention of the public space. It was conceived in 1996, and then revised in 2012.
On the one hand, both the traditional musical writing and the respective interpretation process frame this work within the canons of music of notational tradition. On the other hand, given the nature of its genesis, the work imposes the need to be performed on a large esplanade - ideally a public space -, where attendees can wander freely, experimenting with different listening angles, in short, experiencing the acoustic space and its sound sources in varying degrees of proximity and commitment. This wandering nullifies the deliberate construction of a beginning and an end and encourages a listening where organization and context are randomly entangled.
Its realization is a process forged on the boundaries of composition and interpretation: musicians are invited to make some decisions on the micro and macro-formal nature of the piece. Thus, by considering the founding principles of the idea, such decisions can affect its final appearance as well as its sound formalization.
Both in its more intimate constitution as in its context, its origin goes back to the idea of daily-visited-sounds transformation. This is explicitly (sonically and visually) represented by "fragments of the city", that is, building materials, domestic utensils, etc. Despite the rigidity of the rhythmic writing, these sounds are the support of the work, whose musical relations happen almost randomly, being moment-by-moment (re)created by each listener.
The ideas of Cage and Stockhausen regarding the phenomenon of time have not only stimulated new perspectives on the idea of montage (for example ‘William Mix’ by Cage, and ‘Mikrophonie I’, by Stockhausen) but also the creation of a piece of uncertain duration, since the random choices made by the musicians –prior to the beginning of the work– added to the arbitrariness in the duration of pauses or silences, make that each performance, besides being different sequentially, is also different in duration. Beyond this fact related to the duration of the piece, the temporal space where the acoustic experience of each individual is inserted is framed by the duration in itself, understood as a sounding organizational phenomenon. Materiales has been conceived from duration sequences generated by an algorithm programmed in Common Lisp. Intended as generating entities, these sequences have three basic sequences of 9 durations each. All of them have their own speeds and temporalities.
Each of the three musicians goes over a map of nine places, which correspond to 9 sound families. A random itinerary, generated before the performance, materializes the idea of traveling through these 9 points distributed over the three edges of a large triangle, a sort of urban stroll in whose roads reside these fragments of a city that we never imagined to 'listen'.